Caring for the sick , rebuilding and transforming lives

CHM was called to minister to a lady who went into sickle cell crisis after child-birth. Within one week
of the crisis, she was admitted into the Intensive Care Unit and had to be separated from her new-born baby. As a result of the crisis, her blood count dropped drastically so much so that she had to be transfused with blood on several occasions.

Because of the severity of her condition, her husband was counselled about looking after the newborn baby on his own as very little hope was held by the medical team for her recovery. CHM continued to visit her in the hospital to pray for her.

A few days later, after making a dramatic recovery, she was discharged from the hospital. Her husband was ecstatic about her amazing & miraculous recovery and her relatives gave a testimony to God’s healing power at the CHM International Conference in August 2003.

CHM was informed of an elderly man who was admitted into a Nigerian hospital with kidney / liver problem.

CHM was called to visit an elderly man who was admitted into a Nigerian hospital with kidney / liver problem. His relatives had been informed to prepare for the worst as his condition was very critical. His kidney disease was so bad that the doctors had concluded that he would need a kidney transplant. Unfortunately because of his age and frailty, the decision was taken not to proceed as the chances of success was deemed too low. He was subsequently discharged from the hospital as nothing more could be done for him.

At this point CHM became involved and fervent prayers were offered continually on his behalf. He then started to make a slow recovery until eventually his kidney and liver functions improved. His relatives contacted CHM to report the miraculous improvement.

We thank God for His miraculous healing power.

A pregnant theatre nurse went into premature labour at 24 weeks of pregnancy and was admitted into the labour ward. Not much hope was held for the baby at this stage of pregnancy and the doctors and midwives made that abundantly clear. CHM was at this point contacted to pray for the mother and the unborn baby.

Due to the extreme prematurity and probable complications in labour, the pregnant woman was rushed into theatre for an emergency caesarean section.The operation proceeded successfully and a baby girl was delivered and admitted into the special care baby unit. The baby’s father found it very difficult to bond with the baby because of its extreme prematurity and frailty. However, CHM continued to visit and pray for God’s intervention for the baby’s survival and for her parents for strength to cope with the situation. Miraculously, God intervened and the baby recovered from all complications she developed as a result of her prematurity. After three months in the hospital, the baby was discharged home.
The parents gave a testimony of this miracle at CHM’s 8th International Conference in London in 2008 attending with the baby who had now grown into a lovely 8 year old girl.

A young man collapsed while watching TV in his front room. He was rushed to the hospital and was in coma for three months. He was subsequently found to have had a stroke and developed brain damage as a consequence. A family friend of his contacted CHM the same week he collapsed and we visited him in the hospital. While he was still in coma, CHM continued to visit him and to pray for his recovery.After three months he came out of coma and was transferred from the Intensive Care Unit to the Stroke Unit.

At that stage, he could neither talk nor walk but CHM continued to support and pray for him. One day, while being counselled after prayer, he suddenly jumped up and talked, asking “who are these people praying for me?”. He subsequently continued to make a gradual and steady progress and eventually made a complete recovery. This could not have been possible without the miraculous healing touch from God which we believe he received.

On discharge CHM assisted him to secure supported accommodation from the local council. He has since completed a course in the University, got married and now living an independent life.

Restored after being abandoned in hospital. 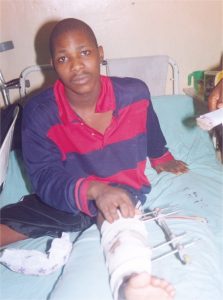 A young man was involved in a road traffic accident in Nigeria which resulted in him having a fractured leg.

He was admitted to but abandoned in an orthopedic hospital in Lagos with no family member able or willing to assist him to pay his medical bill. During a visit to the hospital, his case was brought to the attention of CHM. From that moment, CHM Nigeria began to provide him financial assistance which took care of his feeding and medical bills. Through prayer, his condition improved and he was subsequently discharged. 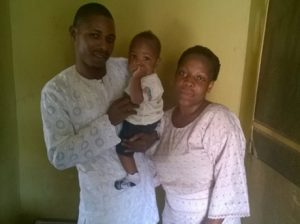 Following his discharge, CHM continued to provide him assistance towards his rehabilitation. We give all glory to God for his complete recovery and we are happy to report that he is now gainfully employed, happily married with a son and a volunteer for CHM. His case was reported in our newsletter for October 2015.